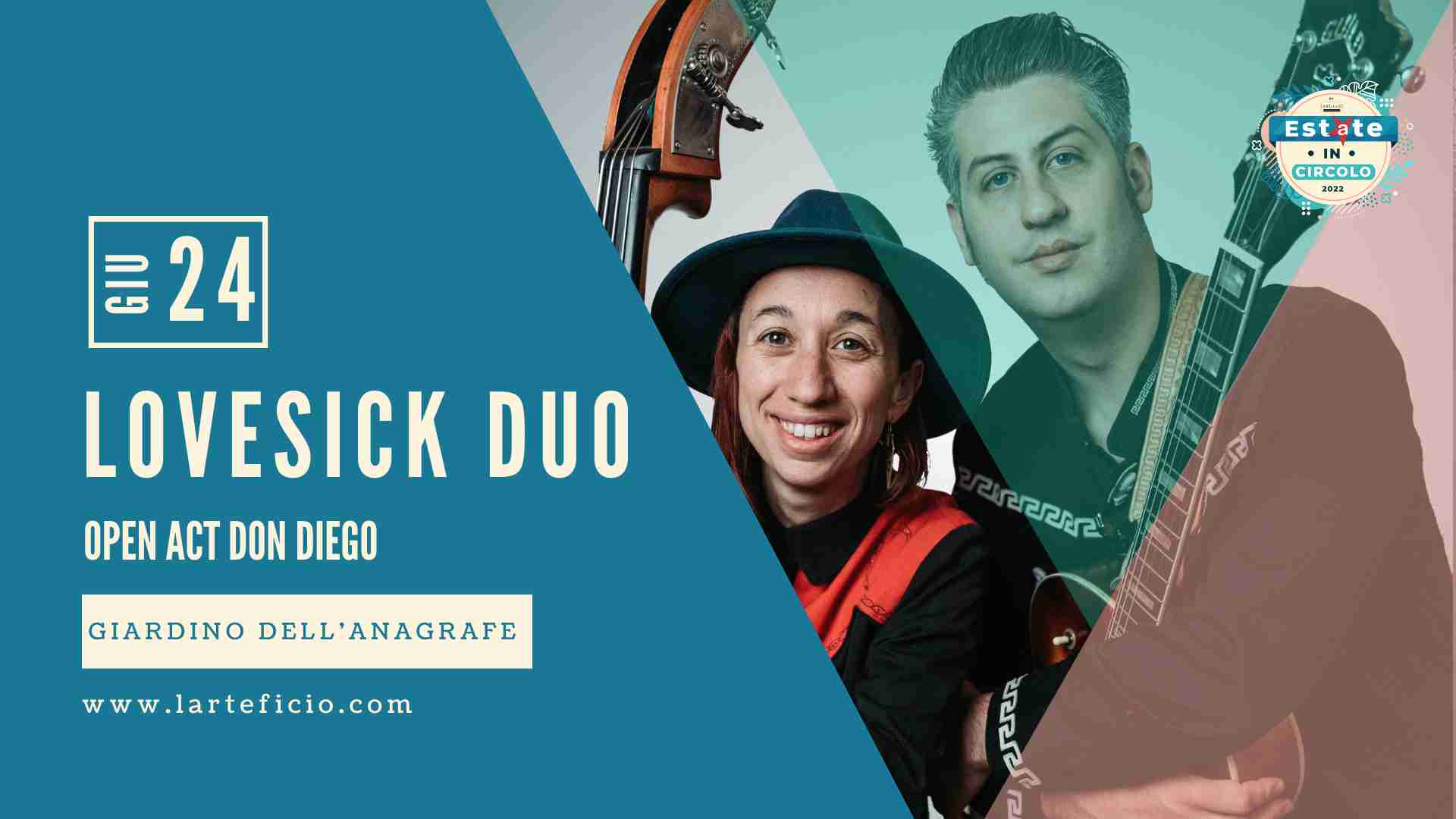 LOVESICK DUO – OPEN ACT DON DIEGO ROCK’N’ROLL, COUNTRY AND AMERICAN SWING FROM THE 40s TO 50s The Lovesick Duo is made up of two Bolognese musicians, both multi-instrumentalists, whose roots draw

ROCK’N’ROLL, COUNTRY AND AMERICAN SWING FROM THE 40s TO 50s

The Lovesick Duo is made up of two Bolognese musicians, both multi-instrumentalists, whose roots draw from the atmosphere and American country, rock’n’roll and western swing music of the 40s and 50s.

In addition to their vocal harmonies Paolo Roberto Pianezza plays electric, acoustic and semi-acoustic guitar, as well as lap steel with single and double neck, resophonic and dobro guitar. Francesca Alinovi plays the double bass with the addition of a brush pad, a percussion built into the double bass that allows her to mark the time with a drum brush.

Their songs have been broadcast on radios in Italy, Spain, France, Belgium, the Netherlands, the United Kingdom, Ireland, the United States and Brazil, receiving a nomination for the US Western Artists’ Award and an invitation to perform as guests at Casa Sanremo at the Palafiori of the Ligurian city, on the occasion of the 71st edition of the Italian Song Festival, in the We Have a Dream program conducted by Red Ronnie. The album comes after Lovesick Duo (2015), New Orleans Session (2017), The Cardboard Suitcase (2018) – with exclusively original songs written in Italian – as well as several singles released between 2019 and 2021. In the various years of activity they have been invited to perform throughout Italy, Switzerland, Poland, France, Ireland, the United States in festivals, clubs, public parties and private receptions, with an average of over 120 concerts a year. Paolo and Francesca also participated as actors / musicians in the Lamborghini film and in the Sky TV series dedicated to Francesco Totti Speravo di died prima.

One of their concerts leads to a total immersion in the atmospheres of the America of the 40s-50s : with their sound, clothing and vintage musical instruments, in their songs they touch the themes most dear to Country Music and Rock’n’Roll like love, betrayal and unbridled fun.